skip to main | skip to sidebar

The rain and SE strongs winds on Saturday produced a new arrival of waders ar Revtangen, and today was all about wader ringing. 10 walk-in traps and 10 spring traps at Revtangen from 09.30-18.30 kept us busy all day. Cloudy, light winds from the south, a few light showers. 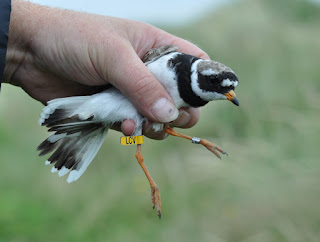 The first common ringed plovers (both adults) of the season was ringed today. Birds are ringed as part of the Norwegian common ringed plover flag project, with a yellow flag with a 3-letter inscription. A red marker on the left tibia is not visible in the picture. Please report any sightings to the project leader Kjell Mork Soot at kjellmorksoot@fugler.com. Sandlo 2K+. 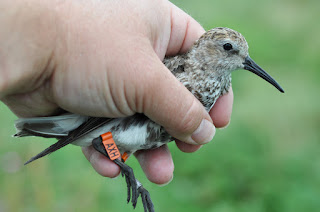 Adult dunlin from the Svalbard dunlin project trapped at Revtangen today. Dunlins from Svalbard only are ringed with orange flag with a 3-letter inscription on the right tibia, and an orange marker on the left tibia. Please report any sightings to the project leader Kjell Mork Soot at kjellmorksoot@fugler.com
Flaggmerket myrsnipe fra Svalbard.

Observations: Hundreds of oystercatchers were moving south, noteworthy movements also of lesser black-backed gulls. At least 1000 dunlins busy with feeding and resting at Revtangen today, accompanied by at least 50 each of sanderling and turnstone, 100+ red knots and 20 little stints. 1-2 peregrines chased them around a few times.